The Campos Family Tradition Jose A. Campos, Sr. was born in 1913 in Puerto de Luna, a small farming town south of Santa Rosa. Along with his family, and the entire nation, he experienced the many hardships of the Great Depression. He worked in C. C. camps and did odd jobs in order to help support the family. In 1942, he enlisted and served throughout World War II. Although he only received a 10th grade education, he often dreamed of starting his own business. He began by hauling ice and coal to Santa Rosa. Little by little, he saved enough to purchase his own trucks. Later, he opened a gas station with his twin brother, Joaquin, and then expanded the station into a Kaiser Frasier auto dealership, and the La Loma Motel. He met his future bride, Carmen, a self-employed pharmacist, in September 1948, at the Fiestas de Santa Fe. They married in January and soon began their family of seven children. In 1956, they opened La Fiesta Drive- In on Route 66. Within a couple of years, they expanded into a full service restaurant, and later, Santa Rosa’s only cafeteria style restaurant.

However, with the creation of the super highways, Route 66 was replaced by Interstate- 40, and Santa Rosa was bypassed. La Fiesta and Downtown Santa Rosa suffered, as did many of the businesses along Route 66. In 1985, La Fiesta was handed down to the next generation, and soon became Joseph’s Bar & Grill. The business expanded to include a gift shop, and a full service bar and nightclub featuring live entertainment and kaoroke. In recent years, Santa Rosa has enjoyed a comeback, thanks to the many return customers from coast to coast, who once traveled old Route 66, The Mother Road. Renewed nostalgia for the old road has brought new friends from throughout the United States, and Europe, as well. In 1990, Jose Sr., or Mr. C. as he was affectionately called by his employees, passed on, but his legacy continues, through his son Joseph, his wife Christina, and their children: Analisa, Andrea and Jose III.

Through the many years and the many changes along Route 66, one thing has remained the same – the Campos family’s desire to provide the best food and the friendliest service, in a warm atmosphere, to its customers, the travelers of Historic Route 66. Who Is The World Famous Fat Man? The Fat Man is the portrait of of a very satisfied, well-fed gentleman with a friendly smile and piercing blue eyes. He was once the logo of the Club Cafe, founded in 1935 by Phillip Craig and Floyd Shaw. But who was the original Fat Man? Was he a caricature of the great orator Will Rogers, or perhaps one of the original owners? No one really knows. But through the years, the Fat Man came to symbolize American prosperity, confidence and resilience even in the face of World War II, Vietnam, Watergate and the 1970’s energy crisis. For generations, the Fat Man invited hungry tourists along Route 66 to drop by for biscuits and gravy, chicken fried steaks and other hearty meals.

The Club Cafe became a popular tourist destination and remained so for many, many years. In 1991, it served its final meal before closing its doors for the last time. Years later, the abandoned building was purchased by Joseph and Christina Campos (owners of Joseph’s Restaurant, just up the street). Unfortunately, the old building was in great disrepair and plans to re-open the Club Cafe were soon abandoned. Fearing the demise of the Fat Man, a local icon, the Campos’s welcomed him into the family and brought him home to Joseph’s Bar & Grill. His smiling face can once again be seen on billboards, mugs and t-shirts welcoming hungry tourists to come by and enjoy a hearty meal in beautiful Santa Rosa.

We are easy to find! Take Exit 275. Turn left and we’re on the north side of the street.
Visit Our Gift Shop On 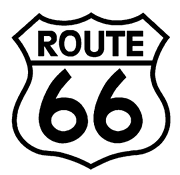